On April 4th, I returned to the trail after enjoying a wonderful breakfast burrito at the Lake Morena convenience store. As I walked back down the dusty path, I thought how spoiled I felt having “real food” on only my second day on the PCT. Feeling rather high-spirited, I decided to push another nearly 15-mile day which landed me at Kitchen Creek Falls for the night. I camped near a handful of other hikers, including a mom and son pair whose story is particularly touching. The mother told me that she had recently developed glaucoma and decided to thru-hike with her 10-year old son so they can see some of the beauty the PCT has to offer before her vision fades. Some of the stories you hear from people during a long-distance hike really make you appreciate things you might normally take for granted. Mother and son pair enjoying the sunset together.

After witnessing a beautiful sunset, I noticed the wind began to pick up. I was pretty excited because I wanted the opportunity to put my Zpacks Duplex tent to the test. In addition to the wind, I was set up in rocky/sandy terrain which covered all of the conditions people warned me my tent wouldn’t work in. I’m happy to report that the tent held in like a champ! The next morning, I received my first act of trail magic on the PCT. A nice fella, the son of a past PCT thru-hiker, was waiting at the next road crossing to treat hikers to fruit and coffee! It still amazes me how selfless people generally are in long-distance trail communities. It seems kindness is infectious, but tends to grow and spread faster in the backpacking community. It’s really something that can’t be explained; you have to experience it for yourself. Nectar of the Gods

The coffee put some pep in my step that morning and I decided I’d try to make it another 10-15 miles. I noticed my knees felt extremely swollen about halfway through the day, and despite my better judgement, I ignored them and kept pushing. Perk, Wookie, and I arrived at Mt. Laguna camp ground a couple hours before dark and I was limping by the time we got there. Part of the issue was my knees, but I was also chaffing between my thighs. Thankfully, the bathrooms were open and we were able to shower, do laundry while bathing and charge our phones which lifted my spirits.

The following morning, my knees were even more swollen. They weren’t painful, but I knew what I felt wasn’t normal. I termed the condition “T-Rex knees” because my knees were so fluid-filled that I couldn’t fully extend them while walking. So, I walked around camp with my bent-knee gait that morning. I hadn’t slept well, either, because I was cold all night. The temperature must’ve dropped fairly low because my clothes were frozen to the top of my tent where I had hung them to dry. I laid everything out on the concrete to thaw and decided I might as well walk into town for breakfast, since I wasn’t in any rush to hike out. On the way to breakfast, my camp shoes (sandals) didn’t jive well with the gravel on the black top and I fell down in the parking lot. I never thought my first fall of the PCT would be in town, but hey, at least I got the initial fall out of the way and it made for a good laugh! During breakfast I iced my knees hoping they would make a quick turn-around so I could hike out shortly after. Some of my fellow hikers at breakfast

Perk and Wookie decided to head back to the camp grounds after breakfast. I told them I was going to make a quick stop by the outfitter, but I’d see them down the trail. At the outfitter, I talked to the owner for a bit about my knees. He told me it was probably overuse and I knew he was right. My mind had been acting as if I had just stepped off the AT, but my body was screaming, “we just got off the couch!” As I was walking around the store, I started to tear up. I knew I needed to take a zero and start off slower to let my body adjust, but I really didn’t want to separate from Perk this soon. I decided to think it over while I tried on several pairs of new shoes. My toes had been hurting since the second day because my shoes were too small. I was upset with myself because that seemed like such a rookie mistake, but in my defense I started the PCT in the same size shoe I had ended with on the AT. Apparently, my feet are still growing and I now wear a men’s 11. Because I had blisters under my big toenails, I wanted a trail-runner that had a large toe box. I decided to go with a pair of 2.5 Altras. 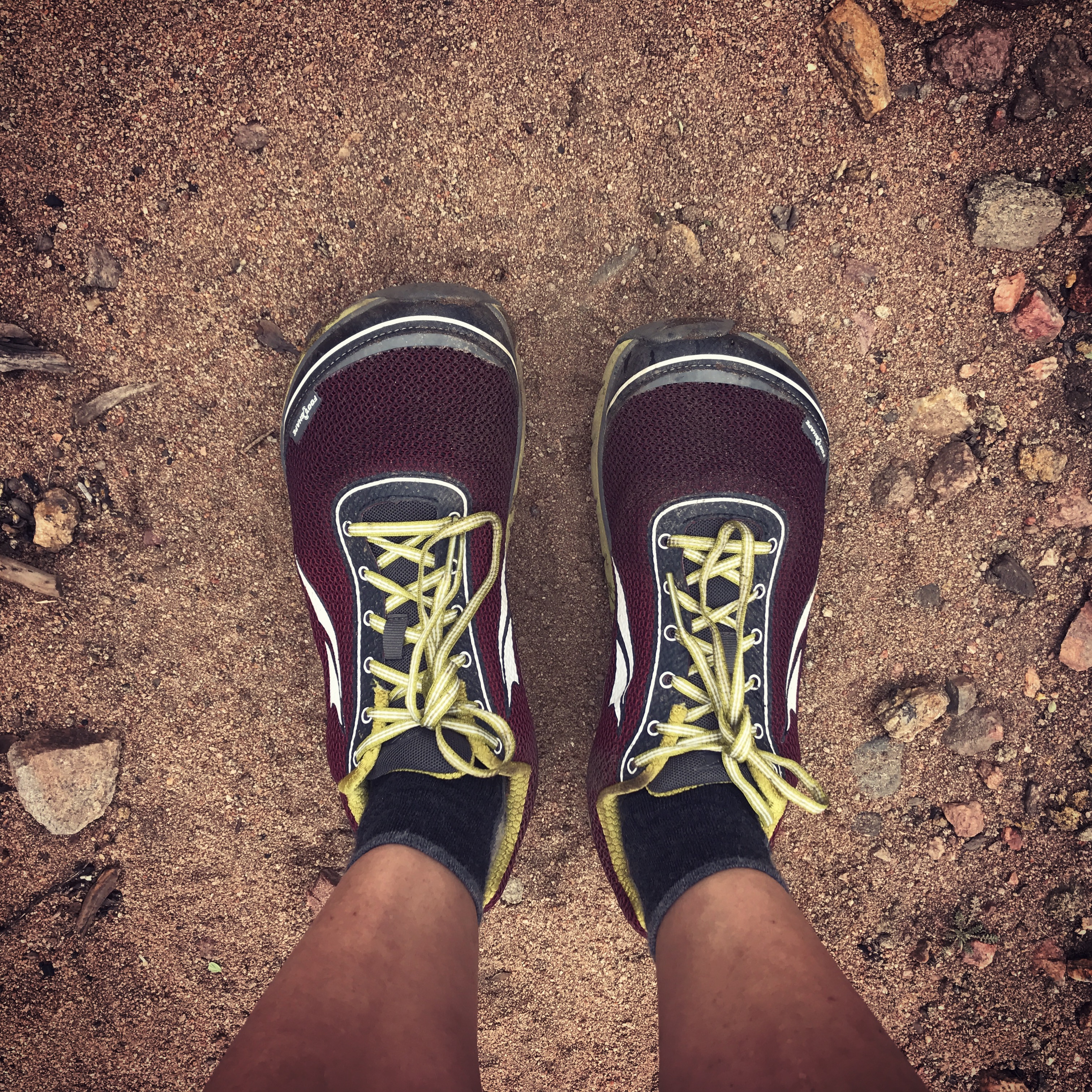 I made my purchase and sat outside the outfitter for a bit. I really wasn’t happy about taking a zero, but I knew it was time to listen to my body. With blisters under my big toenails, chafing between my thighs and swollen knees, was there really a better option? With my head hung, I walked to the Mount Laguna Lodge and paid for a room. I was feeling pretty lousy and antsy, so I decided to walk back down to the outfitter in hopes of at least talking to some other hikers.  Luckily the folks at the outfitter were nice enough to let me loiter around and prop my feet up on the chairs outside, because I ended up double zeroing and I would’ve gone stir crazy alone in my room.  One employee in particular, Hot Legs, was extremely helpful and even volunteered to give me a pack shakedown. Hot Legs acting as a scale to show how HUGE the pine cones are.

He is a veteran PCT thru-hiker, so it was nice to hear his perspective. We laughed a lot as we dissected the contents of my pack. I made a few changes including swapping my solar charger for a 20,000 mAh back-up battery charger. I also sent home my Platypus Gravity Works filter and hydration bladder and am now using my Sawyer filter and 4 Smart Water bottles.

After a couple days of rest, several doses of ibuprofen, and some weight shed from my pack, I was ready to hike out. It was misty and gross that morning, which is pretty unusual for the desert. I probably would’ve had a pity party hiking out alone, but Hot Legs volunteered to hike with me because it was his day off and I wasn’t doing too many miles anyway–so, off into the foggy morning we went. Hot Legs can be seen here in his natural habitat.

I want to say a special thank you to the crew at Mt. Laguna Outfitter–especially Hot Legs. I can’t thank you all enough for your help, kindness, and most importantly, the laughs. If it hadn’t been for y’all, my zeroes would’ve undoubtedly been melancholy. I’ve said it before, and I’ll say it again, the people you meet along the way make your hike!

Here are some other photos I snapped during this stretch of trail: