After crossing the Maryland State Line, I only hiked about 6 miles to Ed Garvey Shelter and camped with Rigga, Howzit, Rebel Yell and Perk. I planned to go to sleep early, so the next day I could beat my record mileage. Looking out over the Potomac River – Maryland

If I hiked all the way to the Pennsylvania border it would make for a 34.6 mile day. The next morning, everyone sounded up for the big day and we set out fairly early. There was some interesting Civil history along the section of trail that runs through Maryland. 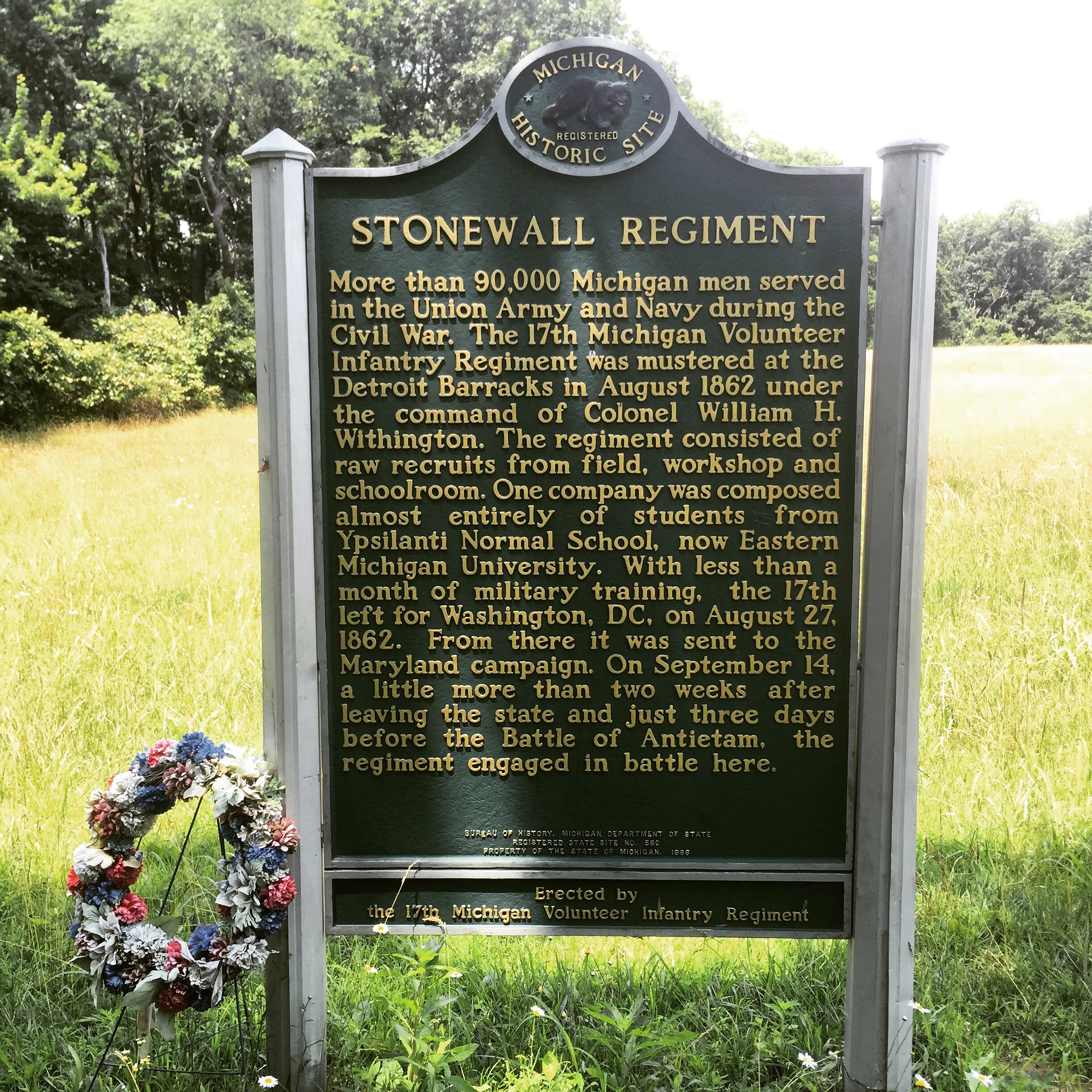 Later that day around lunch, I saw my very first producing cherry tree–I was very excited. Of all the various wild fruits I’ve eaten on the trail including black berries, blueberries, strawberries, wineberries, etc. these wild cherries were by far the most delicious to me! I don’t think I will ever want another store bought cherry…or any fruit for that matter. The trail has spoiled me. Anyway, I ended up hiking 33 miles that day and through a horrendous lightning/thunder storm that night. Most of the group fell out along the way, but I was determined to make at least 30 miles. I stopped about a mile shy of the Pennsylvania border to sleep, so I could enjoy it later in a non-zombie state. When I awoke later, I officially crossed into the territory of the north. I have never really spent more than five minutes above the Mason-Dixon Line, and it never sank in until I had my picture taken with the sign. It’s not that I didn’t want to, I just never had. I feel as if I have travelled a decent amount in my 29 years. I’ve seen 32 states and lived in 4 of them, but wow. I know nothing about the north, so I’m going to take it all in! I’m thrilled that I will have visited 39 states upon finishing the trail–my goal is to reach all 50 by the age of 50.

After crossing into PA, it was time for a resupply. My silly self ended up hitching in on an old Route into Waynesboro, PA while Rigga and some of the others took the new Route (which intersected a few miles further on the trail). Unfortunately, trying to get a hitch back on the old Route at night seemed impossible. I refuse to skip any portion of the trail. So, I camped where I never anticipated I would. Yep. Walmart. I won’t say I’m proud, I will just say that desperate times call for desperate measures! I hoped that morning I would have better luck hitching back to the trail, but no such luck existed. Sigh. I ended up walking the few miles back to the trail head. For some reason, non-trail miles are way more painful. This mistake set me back from most of the group by a day.

The Pine Grove General Store is famous for its ‘Half Gallon Ice Cream Challenge,” in which hikers have the task of gorging themselves with a ridiculous amount of icecream. Because…well, just to see if they can! I was not officially at Pine Grove Furnace on the trail (I had not hiked there yet), so I decided to wait to participate in the challenge until after the 4th of July. But, I cheered on Rigga, Zipp, Perk and Land Mammal. Of course, we had to make a competition out of it and Perk dominated with a time of 18 minutes and 12 seconds. Land Mammal, Zipp and Rigga all finished in 22 minutes and 37 seconds, 35 minutes and 51 seconds, and 1 hour and 27 minutes, respectively. Way to go guys! Rigga, Zipp and Land Mammal participating in the ice cream half gallon challenge

Shari’s husband, Andrew picked us up that afternoon and took us back to their home in Arlington, VA. We decided to zero there for the 4th, and head back to the trail on the 5th. Shari and Andrew were amazing hosts! They shuttled us around town, fed us, and most importantly let us have unlimited play time with their sweet little boy, Ben. Ben, Rigga, Me (Dixie) and Shari

Andrew dropped Zipp, Rebel Yell and I off in DC on the morning of the 4th. We visited the Smithsonian museums, rode bicycles and witnessed an amazing fireworks show! Rebel Yell, Zipp and I My favorite part, by far, of visiting DC was the moment I laid my eyes on the Declaration of Independence…on Independece Day. I literally had chills run up and down my body. Staring at the date written on top of the precious document was honestly surreal. Happy Birthday, America! Home of the Declaration of Independence

The morning of the 5th, Shari dropped everyone off at their respective locations on the trail and we all said our goodbyes. Thank you again to Shari, Andrew, and Ben for your amazing hospitality! I can’t y’all enough.

Below are additional photos captured during this time frame– Thank y’all for stopping by! Until next time–